Over the years, the ACI Asia-Pacific Regional Assembly, Conference and Exhibition has made its name as one of the most important aviation events in the region, addressing major issues affecting the aviation industry and attracting high level representation from airports and industry partners, including airlines, regulators and suppliers from all over the world. 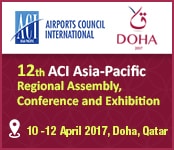 GrayMatter uses cookies to make the site simpler. By continuing to use this site you consent to our use of cookies.Accept