Meet Mr. Vikas Gupta (CEO, GrayMatter and ACI Asia-Pacific Regional Board Director (WBP) who is going to speak about “Improving Profitability and Customer Experience at Airports using Analytics” at 11th WAITSC (World ACI IT Standing Committee Meeting) meeting which is going to be held in Amsterdam, Netherlands on 16-17 March 2017.

Over the past few years, ACI IT Standing Committee has made its name as one of the most important airports officials meeting in the region, addressing major issues affecting the airports, aviation industry and attracting high level representation from airports and industry partners, including airlines, regulators and suppliers from all over the world. 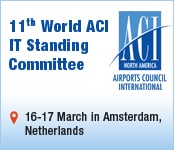